I don’t think you plan a sabatical the way I did. Especially if you’re like me – and you get anxious about the unknown, want to do everything perfectly, and care way too much about what other people think about you.

When I left my job, I had no idea what lay ahead for me. Regardless of the big change I’d made in my life, I had to make some changes to the way I thought about life. What did a sabatical mean to me? What kind of traveller was I going to be? I’ve always done the right thing, because it was expected of me. I cared too much about whether others approved of me, my choices, my clothes, my boyfriends, my career…

My initial idea was to take a sabatical from my career and travel… so, I planned a round-the-world-trip with a route that was practical, to destinations that weren’t really my first choices, all because I listened too much to what others said. I was so disconnected from what I wanted, that I did not know how to want what would make me happy. My decisions were based on what I thought the “right” thing was. On what I thought others expected of me. On what I thought was expected of someone who was travelling around the world.

Jobless, homeless and in foreign countries, there was nothing familiar to hold on to. I had to redefine what this new life meant to me, what I wanted to get from it. I had to find a way of living that worked for me.

Finding my own groove, however, has taken quite some time… 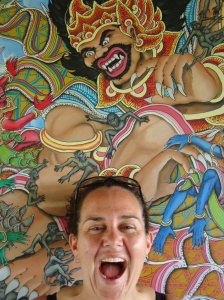 I went into this crazy trip, not knowing what lay ahead, and not always really wanting to be where I was going. In a way, it was a blessing – I had to let go of so many preconceived ideas about how things should be, because nothing was as I’d expected.

I had to find my own way as I went along. I had to stop, and think about what made me happy. This realisation hit me on my arrival in Jakarta. I was on a trip that scared me, stuck in the most horrific city I’d ever been in – 15 million people, smog, heat, insane driving – and hardly any tourists in sight. I had never felt so foreign in my life! I simply could not deal with being there, and the thought of just going home and ending all the insanity was very tempting. But, I decided… stop trying to travel the way you think you should be doing it, the way others think you should be doing it… make this easy for yourself. I bought a ticket to Bali (where the hardened travellers don’t go, because its too touristy!), joined a tour group (what the hardened travellers don’t do… because you can rough it and do it much cheaper on your own) and saw the most incredible things, had the most incredible experiences, and met the most incredible people. I started to relax.

From that moment on, I decided to travel my way. I would see and do what I wanted to – not because a guidebook told me to. I would rest when I needed to (this was my sabatical after all), eat my breakfast at leasure, drink tea with strangers… and I would not plan my days but let them unfold.

I would do my own thing, or nothing… but I’d stop caring about what others thought.

“… no one ever mentions the … rush of pleasure of not doing what is expected of you, of not doing what you expect of yourself. Of not doing. If it was originally about disappointing other people, it has become refined into a matter of pleasing myself. … It wouldn’t make an iota of difference to the world, or in reality to me, if I didn’t actually stand on the Antarctic landmass. Been there, haven’t done that. I liked the absurdity of it, and the privacy. Its a matter entirely between me and myself… There was no longer a choice that had to be made, or an effort of will (I should, I ought, I must), no moral quandry, but something quite arbitrary. A great sense of freedom settled gently over me like a pure white goose-down quilt, and freedom, from that angle, looked very like uncertainty.” (Skating to Antarctica, Jenny Diski)

Is it society, the media, our peers or our parents who create this notion that there is a right way to live life? I’ve battled with the desire to fit into a socially acceptable groove, my whole life. Always doing what I thought others expected me to do, and very rarely wanting what was right for me.

I thought I’d learnt what it meant to ‘go my own way’ while I was travelling, but I never really stopped caring about other people’s opinions. It was only recently when I met my biker on Ithaca, that I really understood what it meant. It does not matter whether other people approve, or even what they think of me. Its my life, and if it makes me happy – then do it.

There’s still a lot more to say about expectations (in another post). But, look out for my next post, something lighter – on simple pleasures.

5 thoughts on “Finding my own groove”